This is an open access article distributed under the Creative Commons Attribution License, which permits unrestricted use, distribution, and reproduction in any medium, provided the original work is properly cited 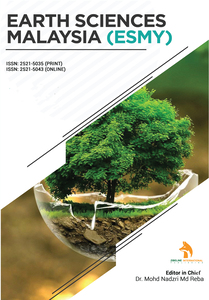 A paleontological research was conducted in Labuan in pursue of the foraminiferal species of benthic species. Fifteen mudstone samples from Temburong Formation were taken and successfully extracted an amount of benthic foraminifera. The Labuan Island is consists of two major depositional environment; deep-marine and shallow-marine environment, which is highly valuable geologically but the samples were all of Crocker Formation and Temburong Formation to investigate the fossils content of the turbidite sequence. The Temburong Formation comprises of mainly flysch deposit. All of the benthic foraminifers were processed and extracted accordingly using the standard paleontological method with additional method of adding 25ml to 30ml of Hydrogen peroxide. A total of 37 species were found and identified, consist of hyaline and agglutinated group. Thus, the Temburong Formation is considered as deep-sea deposition with the evidence of deep-marine agglutinated foraminifers assemblages ranging from bathyal to abyssal.

Earth Science Malaysia has been successfully indexed with DOAI since 2018 Congratulations to all the editorial team!

The publication is licensed under a Creative Commons License (CC BY 4.0) . View Legal Code